ACETIC ACID 99.85% GLACIAL 25L ACETIC ACID 99.85% 25L is simply acetic acid without any water in it. It is undiluted acid. This means it is highly corrosive and should not be consumed unaltered. However, when glacial acetic acid is diluted, it can have medicinal properties, and when it’s diluted enough, it can be a food ingredient. In fact, this product may be called kosher active acid or kosher glacial acetic acid, because glacial acetic acid is considered kosher even for Passover. If the people your industry serves are wondering where to buy kosher active acid, they are looking for a form of glacial acetic acid. ACETIC ACID 99.85% 25L (also known as ethanoic acid) is an organic compound with the chemical formula CH3COOH (also written as CH3CO2H or C2H4O2). It is a colourless liquid which when undiluted is also called ‘glacial acetic acid’. Acetic acid is the main component of vinegar (apart from water; vinegar is roughly 8% acetic acid by volume), and has a distinctive sour taste and pungent smell. Besides its production as household vinegar, it is mainly produced as a precursor to polyvinylacetate and cellulose acetate. Although it is classified as a weak acid, concentrated acetic acid is corrosive and attacks the skin. Acetic acid is one of the simplest carboxylic acids. It is an important chemical reagent and industrial chemical, mainly used in the production of cellulose acetate for photographic film and polyvinyl acetate for wood glue, as well as synthetic fibres and fabrics. In the home, diluted acetic acid is often used in descaling agents. In the food industry, acetic acid is used under the food additive (EU number E260) as an acidity regulator and as a condiment. It is widely approved for usage as a food additive. For a weaker solution, click here. NOTE: THIS PRODUCT CAN ONLY BE DELIVERED TO COMMERCIAL PREMISES. 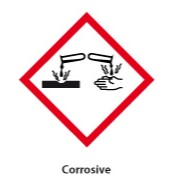